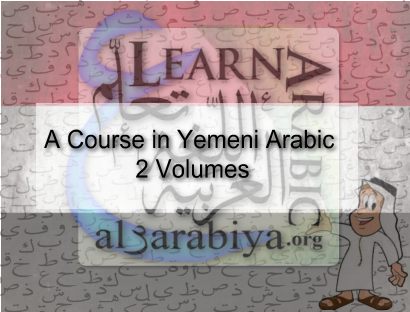 A Course in Yemeni Arabic VOL I and VOL II

Yemeni Arabic is a cluster of Arabic varieties spoken in Yemen, southwestern Saudi Arabia, and northern Somalia. It is generally considered a very conservative dialect cluster, as it has many classical features not found across most of the Arabic speaking world.

Yemeni Arabic can be divided roughly into several main dialect groups, each with its own distinctive vocabulary and phonology. The most important of these groups are San’ani, Ta’izzi, Adani (Adenese), Tihami and Hadhrami (Hadrami). The independent languages of Mahri (Mehri) and Suqutri (Socotri, Soqotri) are not Arabic dialects at all, but developed from Old South Arabian via the ancient Sabaean language, which are related to Ethiopic Languages

The course in YEMENI Arabic is excellent. Thanks so much. Is it possible to post the audio component, thanks for your dedication! May Allah grant you peace and prosperity!

I did not check your response here and I posted the same request somewhere else. My apologies, but again just wanted to say excellent work and may Allah reward you!!

Sorry i don’t have the audio, i would post it here if i have it