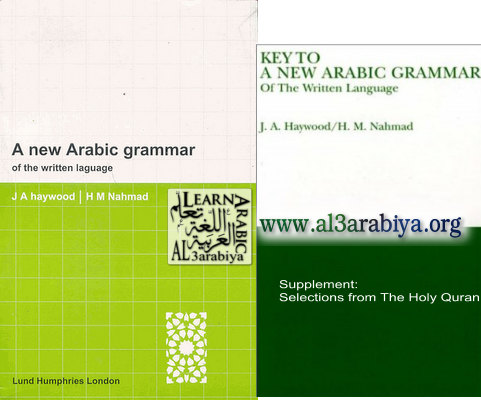 Author: J.A. Haywood, H.M. Nahmad
John A. Haywood, the author, spent many years as a British civil servant and academic in Sudan. His grammar is the outcome of a lifetime of study of Arabic. Haywood and Nahmad, as the grammar is affectionately called by students of Arabic, came out in 1965. It is used in universities all over the world, and has been translated into Spanish.
The grammar gives the English grammatical terms, so it is also a useful grammar for anyone teaching English in the Middle East where English can be simplified by pointing out its differences with Arabic. Arabic is a much older language than English and has dropped most of the awkward complexities that English still has in favor of a logical simplicity that was, one might say, codified, in the Abbasid period in Iraq in the 9th century AD. The enumeration of the differences between English and Arabic for the purpose of making English easier for Arabic speakers has yet to be done, but Haywood’s grammar would provide a starting point and a skeleton for such an endeavor.
Haywood and Nahmad provide the Arabic terms in brackets (one time) for the grammatical points he mostly describes in English, of course. You have to know your English grammar from the old school pretty well. There are none of the modern English grammar neologisms such as “Demonstrators” for indefinite or definite article, or “helping verb” for present and past perfect. There is no present or past perfect in Arabic. As in yet another language which is older than English, French, these problems have dropped by the wayside in the Arabic language, and Arabic has only the present, the past, the future and the “command” forms. A better example of what I mean by the fact that you have to know the “real” basis of English grammar, and not the neologisms, to appreciate this book, is that you have to know what subjunctive and jussive mean, for example.
Some of the most judiciously researched parts of the book are the introduction and the selections from Arabic Literature. His selection reads like high points of Arab, and thus, “humanity’s” culture: Ibn Khaldun, The Arabian Nights, Tawfiq al-Hakim’s “Diary of a Country Prosecutor,” for example.

A New Arabic Grammar of the Written Language

(Thanks To 329info for sharing)

Supplement Selections from The Holy Quran