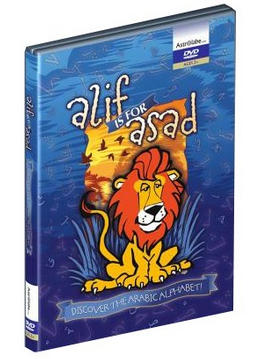 ALIF is for ASAD!

Finally a fun way to learn Arabic!’ Now everyone can teach children to recognize and pronounce the letters of the Arabic alphabet – with the help of this activity-filled video. Through catchy sing-along songs and colorful graphics children will learn the letters while also expanding their Arabic vocabulary. The video includes the following sections: Zoo Trip – learn 28 letters and animal names through the title song, Alif is for Asad; Animal Names – practice the animal names, in English and Arabic, and see them written on-screen; Funny Formations – learn construction of the letter shapes as groups of children make the shapes of the letters with their bodies; Letters in Space – travel the galaxy retrieving the Arabic letters that have been scattered by a meteor; ‘Phabulous’ Phonics – a fun song over stop-motion photography which teaches the differences between certain sounds in Arabic and similar sounds in English; Arabic Achievement – the `grand finale’ another animal song but this time entirely in Arabic. This video is a `must’ for anyone trying to teach the Arabic alphabet!