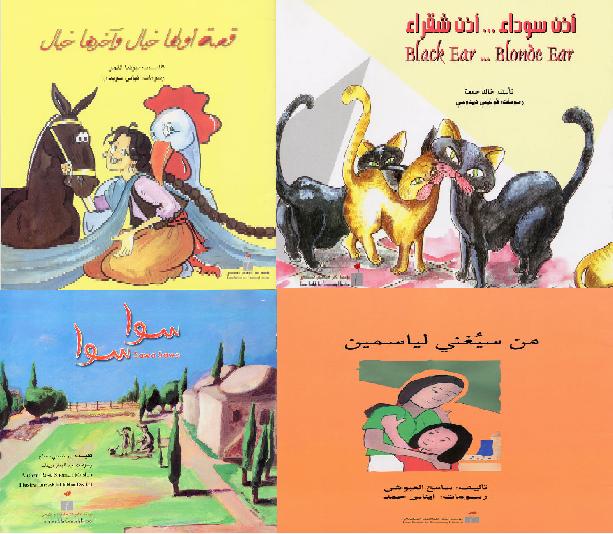 Author – Khaled Jumm’aIn this story, two groups of cats, the blonde cats and the black cats, live on different sides of the river. They agree that a black cat will lead all the cats half the year, and a blond cat the other half of the year, but fights still break out between the two groups. Suddenly a gray cat is born, he is wise, and all the cats like him. They decide to make him the leader all year long. The situation is calm for a while and then fights break out. The gray cat orders all cats to take off their ears and give them to him. When the cats are given back their ears, the black cats are given the blond cats’ ears, and visa versa. Suddenly each group hears voices they never heard before, the voices of the other group. They needed to exchange ears to be able to hear each other.

Author – Rose Shomali MulsehFaris is happy participating in housework, until peers in the neighborhood tell him this is women’s work. They also laugh at him because he plays with his female cousins. Faris decides to refuse to continue to work in the house and tries to order his mother to prepare his food, but he later notices that his father participates in housework. Finally, Faris realizes that he must do what he thinks is right and ignores his friends comments as he prepares a birthday cake at the end of the storyArabic Collection Childrens Books

Who will sing to Yasmine?

Yasmine’s mother announces that she is travelling abroad. Yasmine is upset by the news, but ultimately adapts, in a home where the father supports the mother’s travel, hangs the laundry, and participates in childcare.
A story that begins and ends with the imagination
Author – Sonia Nimr
The King complains that his son must hurry and find a bride from amongst the beautiful women of the Palace. But the prince is bored by empty beauty. The Prince insists on marrying a woman who is smart, and establishes a story-telling contest (where the winner must tell a story which begins and ends with the impossible) to find the cleverest woman in the kingdom. The woman he falls for is not “beautiful” by traditional standards and wears simple clothing, but enchants the prince with her creativity and wit as she weaves a story with endless surprises. The storyteller finds a city atop a palm tree, steps into a market inside a watermelon grown on a magical field, and, after an endless series of surprises, is ultimately “shot from a cannon” for pulling the tail off a donkey (a false conviction by a zany judge), landing in the castle in front of the Prince.
Read / Download