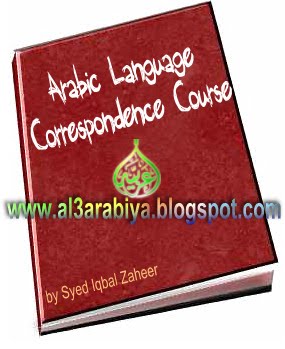 Earnest Renan (1823-1894) carried out an extensive research on Semitic languages. He wrote a book on their vocabularies in which he had the following to write about the Arabic language: “The Arabic language is the most astonishing event of human history. Unknown during the classical period, it suddenly emerged as a complete language. After this, it did not undergo any noticeable change.”
This program has been primarily designed as a correspondence course. In this system of learning, the student is sent a few lessons every few weeks. He or she does them at the rate of one a week and sends back the exercise sheets for our evaluation. From time to time, we inform the students about how they fare.
However, somebody with greater enthusiasm might not require to go through this method, and so, may opt to do the course all by himself or herself: without sending us the exercise sheets for evaluation. The choice is yours. In fact, after trying this latter course, if you wish to change the method of study, you can still rejoin as a corresponding student. For us the important thing is that you learn the language – in the cheapest and most convenient way.
The course has been primarily designed for those who wish to learn the language of the Qur’an and Hadith (Prophetic sayings). Accordingly, its vocabulary is mostly from these two sources. In the advanced stage, you will have examples from Qur’an and Hadith commentaries and other related texts. Nevertheless, a good amount of non-religious literature has also been used. The emphasis, however, is on religious text. Grammar rules of course do not change, whether you learn classical Arabic – the language of the Qur’an and Hadith – or modern Arabic, which requires vocabulary of a different sort. Once you know the rules, you can manage both.
Now, how much of the Qur’an and Hadith will you be able to understand when you are through with this course? Well, it is expected that you will be able to understand almost all of the Madinan portions of the Qur’an and most of the Prophetic statements. For higher understanding, you will have to study further, which you will be able to do on your own, thereafter.
All in all, there will be about 75 lessons, spread over three levels. Every lesson is explained through an audio cassette. And the method is: you read a lesson at least once, then listen to the tape with the lesson before you. Hopefully, you should have few problems in understanding. If you have, you could always write to us.
This course been conducted several times over, with fair success. Yet, for some it might prove to be tough. But they must show patience, especially in the earlier stages. Every new lesson might add to difficulties. But, they must keep going. Because, as they advance, previous lessons will become easier.
A note might be placed here. The process of learning is never interesting. So we have brought in a few surprising sentences, and have added humor here and there, along with some remarks critical of a class of people, or a culture. They are not there for the sake of criticism, but rather, for evoking interest – a wake up call, if you are dozing off. So, they may not be taken seriously.
Syed Iqbal Zaheer