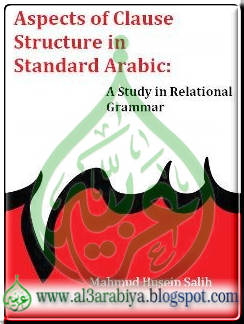 Aspects of Clause Structure in Standard Arabic:
A Study in Relational Grammar

The present study aims at examining aspects of the clause structure in Standard Arabic (SA); specifically, those clauses which involve and are relevant to “double accusatives”. Double accusatives denote clausal structures having two nominais marked for the accusative case. Linguists like Wright (1974) and Comrie (1976) make the strong claim that SA tolerates “double direct object” constructions. Accord- ingly, such constructions violate a universal posited in the linguistic theory of Relational Grammar (RG), the Stratal Uniqueness Law which states that no more than one nominal can bear a given grammatical re- lation like direct object in a single level of structure