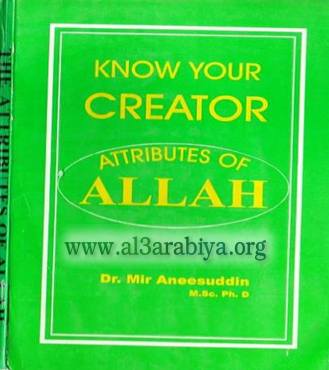 Attributes of Allah – Know your Creator

Allah is the name of the Divine Being Who exists necessarily by Himself, comprising all the Attributes of perfection. Allah is an underived word – it neither has a feminine nor a plural; it has never been used for anything except the True God. The Arabs too, during pre-islamic days, did not give this name to any of their idols. As a proper noun and a name, it cannot be translated into any other language. The word god is the translation of the word Ilaha which is not a personal name but the name of a status or designation like president, chairman, king, etc., held by persons having different names. There is only one Ilaha and that is ALLAH. In the Quran nothing is mentioned about His form (shape or size); He is therefore beyond human imagination but His functions have been mentioned as His Attributes and we are required to recognize Him only through His Most Excellent Attributes.
In this work an attempt has been made to explain the attributes of Allah ( S.W.T. )
( اَلاَسْمَآءُالْحُسْنَى ) through associated words and their opposites used in the Holy Quran.