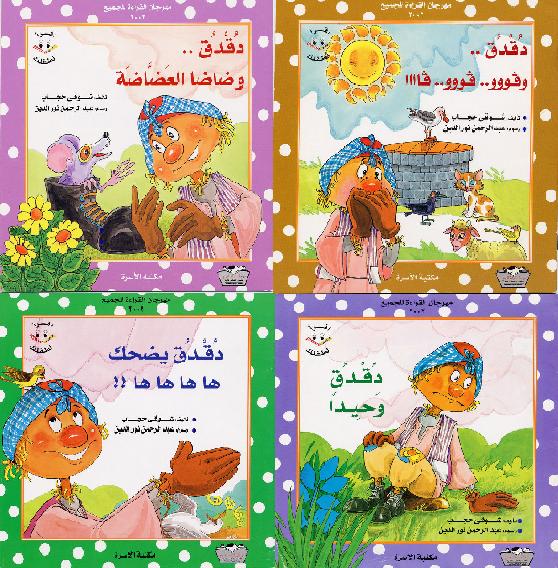 Dokdok is a scarecrow
Dokdok is a scarecrow who can talk and move. His friends are Nouras the Sea gull, Gharab the crow, and Abou Fasada the bird. ..
Author: Shawky Hegab  Illustrator :Abdel Rahman Nour El Din
Language: Arabic only
Dokdok and Dada the biter
One day Dokdok wakes up in pain and he finds out that Dada the mouse is biting his feet in her attempt to steal his shoes. She succeeds in stealing the shoes and takes them home to sell so that she can buy shoes for herself. Dokdok calls on the cat for help. The cat cuts the mouse’s tail off. In return for the tail, the mouse must find many things for all the friends. The mouse soon learns it was all a trick to give back Dokdok’s shoes. The mouse finally gets its tail back but doesn’t know how to put it back on. The friends send her to the spider to teach the mouse how to sew and knit so that she can sew her tail back on and be useful rather than have to steal from others.
Dokdok and vou vou va
This story is about the importance of knowledge and learning. Dokdok is alone in the field and makes sounds that echo. We learn that the moon comes out at night, followed by the sun in the morning which moves in the sky. They take a look at the city, the zoo, and the field. Dokdok hears a loud voice saying “Vou Vou Va” and the sound scares him. Each of his friends keep on guessing what this sound is and they are all frightened except for the sun and the moon. The friends keep saying it is a ghost and are so frightened until a farmer explains it to them. It is the sound of the wind over the well.
Dokdok laughs ha ha ha!
Dokdok and his friends are in the field and they see a mouse running away with a piece of cheese. Dokdok remembers seeing a mouse running away from a cat, so they imitate the cat’s voice to make the mouse afraid. Then they chase away the cat that stole the fisherman’s fish by barking like a dog, and do the same with a number of different animals.
Dokdok lonely
In this story we are introduced to the scarecrow standing all alone in the middle of the field. He cries for someone to come and talk to him but the wind just keeps repeating his words. When he says listen to my heart beating “dok dok dok”, he hears the wind repeat the same sound. This is how he got his name. The Sea Gull is the first to befriend Dokdok and finds that he is not scary at all. We are introduced to his friends, one after the other. This is the beginning of a series of stories about the adventures that the friends encounter together.
Uploaded by MasteringArabic

Dokdok and Dada the biter