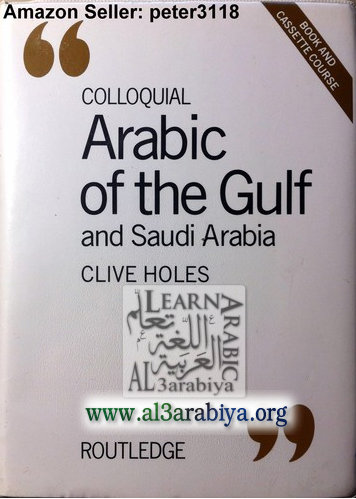 Colloquial Arabic of the Gulf and Saudi Arabia:
A Complete Language Course

Colloquial Arabic of the Gulf and Saudi Arabia is easy to use and completely up-to-date. Specially written by experienced teachers for self-study or class use, the course offers you a step-by-step approach to written and spoken Arabic
Audio taken from the cassette that comes with the book (1984 Edition)

From the Back Cover
Gulf Arab is the term used to refer to a number of related dialects which are spoken along the Gulf littoral from northern Kuwait to Oman in the south-eastern corner of the Arabian peninsula. The people who live in this area are linked to each other by trading and seafaring traditions which go back many centuries, as well as by the complex tribal structure of Arabia. With the development of education since the second world war, and increasingly close social, political and developmental ties between Gulf states, a form of dialectal Arabic has evolved which is not closely associated with any one particular state, and which exhibits features common to them all. This is still unmistakably ‘Gulf’ in its basic pronunciation and morphology, as well as in its basic lexical stock, but its syntax and to some extent lexicon have been influenced by standard Arabic and other Arabic dialects. This provides a description of this educated, pan-Gulf dialect, based on many hundreds of hours of tape-recordings of natural conversation made in a variety of locations in the Gulf.
Audio taken from the cassette that comes with the book (1984 Edition)

is Kuwait Arabic very similar then to Saudi Arabic? They’re both Gulf Aabic, so I guess so…

salamo alikom, where is the book for this tapescript? shokran,waiting for an answer