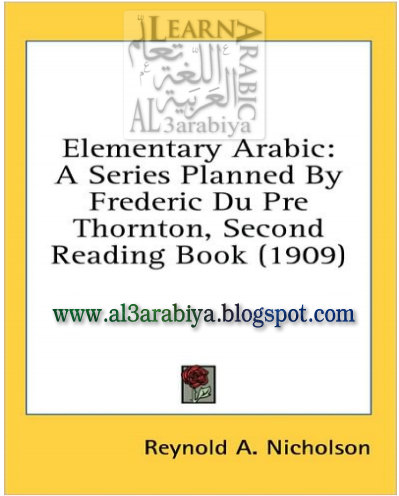 Lecturer in Persian in the University of Cambridge, and some time Fellow of Trinity College Cambridge at the University Press 1909 . PREFACE THIS Reading 7 Book is the second of three which were planned by the late Mr Thornton for his Arabic Series. The first, published in 1907, contains certain extracts from the Koran, a portion pp. 13 64 of Wrights Arabic Reading-Book, a grammatical analysis of the Koranic text, and a glossary the third, which I hope to bring out next year, will comprise the remainder of Wrights work, a glossary, and brief explanatory notes. The present volume is marked by some novel features. 1. The selected passages are taken from texts and many scripts which, so far as I know, have not hitherto been edited by any European scholar. 2. They have been chosen and arranged in chronological order with the purpose of illustrating the literary, social, and religious history of the Arabs. 3. Notes have been added at the foot of each page, partly to explain grammatical and linguistic difficulties, and partly to supply such literary and historical information as is indispensable. I will now state the various sources from which I have derived the nineteen extracts included in this book. I. The manners, customs, and beliefs of the Pre-Islamic Arabs. This passage is taken from the Mustatraf, an extensive anthology compiled by Muhammad ibn Ahmad al-Khatib al- Abshihi, who died about 1450 A