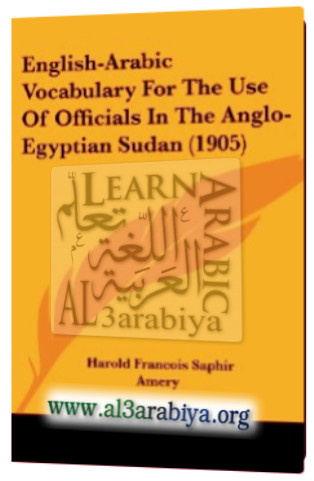 English-Arabic vocabulary for the use of officials in the Anglo-Egyptian Sudan. Comp. in the Intelligence department of the Egyptian army,by Captain H.F.S. Amery

This Vocabulary has been compiled primarily for the use of British Officers and Oflicials serving in the Anglo-Eoyptian Sudan, but it is hoped that it may also prove of some use to visitors

to the Sudan, or to those interested in the various dialects of the Arabic language.

It consists of two distinct elements : —

1. The technical terms in use in the Egyptian Army and in the various Departments of the Sudan Government.

2. Some 3,500 words of the most common daily usage, translated into the Arabic equivalents emploj’ed for tliese in conversation among the Arabs of the Anglo- Egyptian Sudan.