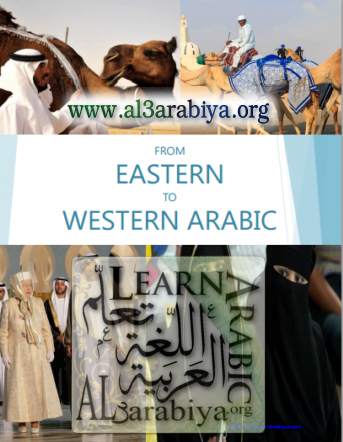 This manual is designed to provide instruction for persons who have learned well a dialect of Eastern Arabic, Levantine, and who desire to use a Western Arabic dialect, Moroccan. Special features of Western Arabic pronunciation, grammar, vocabulary, and social usage are listed. Attention is given to the recognition of correspondences between the two dialects, emphasizing those deceptive correspondences that may lead to interference in the transfer from one dialect to another. To aid the student, the following aspects of the Eastern and Western dialects are contrasted: (1) pronunciation variation in Classical, Levantine, and Moroccan Arabic; (2) word and affix contrasts in the Levantine and Moroccan dialects; (3) differing sentence structure and time concepts in Moroccan Arabic; and, (4) special word groups and auxiliary words occurring in both Eastern and Western dialects. In addition, the Moroccan Arabic expressions for certain social situations requiring standardized phrases are described. An appendix containing verb tables, false cognates, variable words, and a glossary of Western Arabic is provided. (Author/LG)<
PDF: 1MB