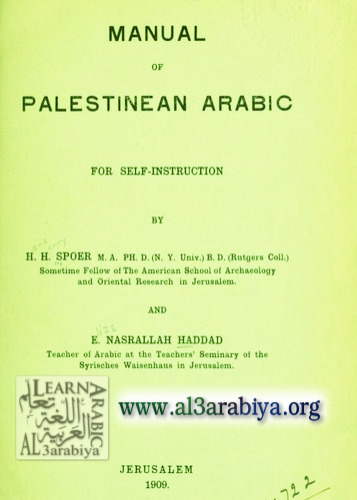 Manual of Palestinian Arabic, for self-instruction

The present volume has grown out of a need — which I have abundant reason to suppose that others as well as myself have experienced — for some means of acquiring a knowledge of the Arabic dialect spoken, not only in Jerusalem, but with some slight variations, in the whole of Palestine, to-day.

Such manuals as already exist in English are, for the most part, adapted for the Egyptian Arabic, or for the Libanese such as is spoken in Beirut and in the north, or for other special districts,
and may be misleading, especially in nomenclature, to such as have learnt no Arabic whatever; and confusing to those who, like myself, when I came into this part of the country six years ago, are students of the classical language only. Such manuals, moreover, contain many words which occur only in modern, literary Arabic, and which, as not belonging to the vernacular and not understood by the populace, have, in this volume, been carefully excluded.
I have sought to adapt this work to the Arabic student interested in the dialect as such, as well as to those requiring the language for daily use iu Palestine ; also to the passing traveller seeking to make himself understood, and to understand those about him. In these days of multiplication of railways, hotels, and other conveniences of travel, when the often obtrusive dragoman is
happily becoming less of a necessity, the demand for a practical phrase-book is increasingly urgent. The necessary limits of such a Manual obviously preclude the possibility of presenting a Grammar which is exhaustive, even in regard to the vernacular; it is however hoped that it may be found to include all that is necessary for such practical use as has been suggested.
The Latin script has been used throughout, in order to give the precise pronounciation, each word being transliterated as uttered in the vernacular, regardless of its form in literary Arabic from which there are many deviations, especially in the s sounds. The literary