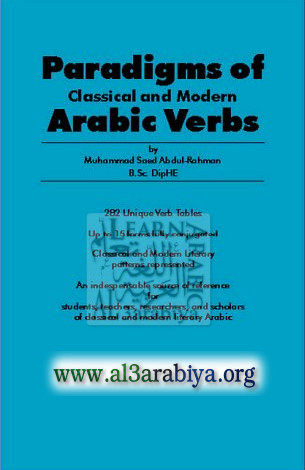 Paradigms of Classical and Modern Arabic Verbs by Muhammad Saed Abdul-Rahman (B.Sc. DipHE) This book presents 282 tables of Classical and Modern Arabic Verbs. These fully conjugated tables are used as paradigms for other verbs. Each table represents a very clear and typical example of a particular type of verb. For example, kataba – yaktubu (written in Arabic in the boo) is characterised by its perfect having Fatha as the vowel of its second radical and its imperfect having Damma as the vowel of the second radical. This verb is a sound simple triliteral verb and it is given in this book as a paradigm for any sound simple triliteral verb whose perfect is distinguished by Fatha as the vowel of its second radical and Damma as the vowel of its imperfect’s second radical. In additon to showing the active and passive voices of verbs, the tables also give the roots, the active and passive participles and the verbal Nouns of both the simple and derived forms of classical and modern Arabic verbs. The book is suitable for students and scholars of all ages. Older students can use it unaided to conjugate any Arabic verb found in dictionaries. Teachers, researchers and scholars of Arabic Language and Literature can use it as a quick reference guide to conjugate verbs and to provide drills for their younger students. “I’ve taken a look at the book, and it is very interesting. It’s an excellent reference for second and third year students who are finally committing the entire verb system to memory” (Ziad Munson, Department of Sociology, Harvard University, USA) 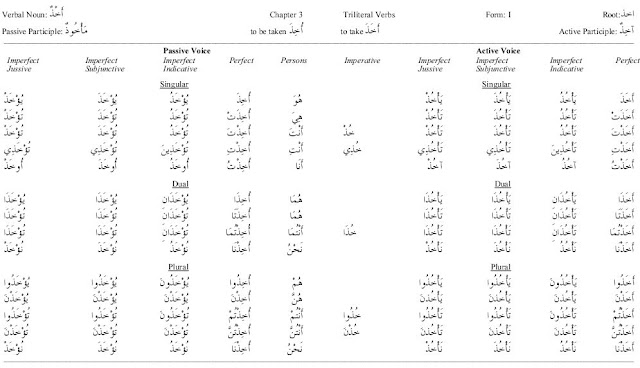