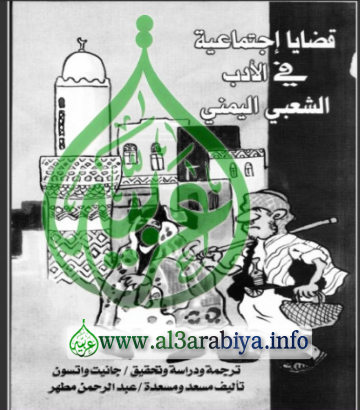 Since February 2002, English translations by Janet Watson of episodes from a popular Yemeni radio series called Mus’id wa Mus’ida, written and produced by Abd al-Rahman Mutahhar since 1988, have been published in the Yemen Times. This book contains fifty such episodes, each of which takes the form of a spirited, often acrimonious dialogue between husband (Mus’id) and wife (Mus’ida); and each is illustrated with a drawing by the Yemeni cartoonist Muhammad al-Shaibani, whose work appears in the daily newspaper al- Thawra and enjoys great popularity.

Brought together in this book, therefore, are two forms of contemporary Yemeni art which address social issues through satire to raise public awareness and promote a wider sense of social responsibility. Most of the issues covered have a bearing on the position and treatment of women and children, health, marriage, family planning, pollution and the environment.

Janet Watson, who has expert knowledge of colloquial Yemeni Arabic, in particular the Sana’ani dialect, has translated the fifty episodes into vernacular English. The result will benefit Yemeni students of English, just as the original Arabic text, with its pithy proverbs and apposite quotations from the Quran, will benefit and entertain the foreign student of Arabic. But the value of the book goes beyond linguistics. It offers many insights into the attitudes of a traditional Muslim society seeking to adjust to the pressures of modern development; so there is much here to enlighten, as well as entertain, the non- Yemeni reader.