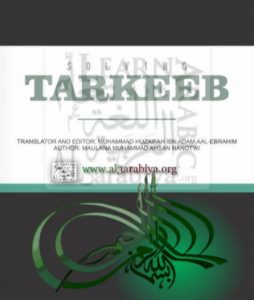 In the Arab world, Tarkeeb is an entirely foreign concept. This might lead some to believe that it is unnecessary, whereas this is not the case. Tarkeeb is, in fact, a very useful invention which the `Ulamaa of the Indo-Pak subcontinent had added to the glorious Arabic language, and their efforts should not be discarded derisively. Rather than discard it simply because it is unknown in the Arab lands, we should look at the benefit it contains, and how it provides a much greater understanding of the language.

This is a good Kitaab on Tarkeeb/I`raab for beginners.

May Allaah Ta`aalaa make it a means of benefit to myself and all those who read it, Aameen.