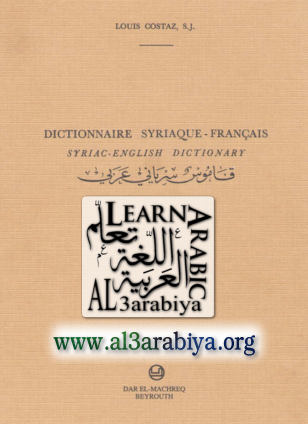 Louis Costaz produced a very handy Syriac-French-English-Arabic dictionary, first published in 1963. It has proven so useful that it is now in its third edition . This dictionary has the advantage of being concise without being very limited. It does not overwhelm the user with an exceedingly long string of possible translations (as Payne Smith sometimes does), and it has a wide variety of words, including a few omitted by Payne Smith. Payne Smith, though, does have more words overall. One extremely helpful feature of this dictionary is its list of proper names, which is found in an appendix. This is a feature whose absence is often felt in Payne Smith. It does not have every proper name found in Syriac literature, but it has a large number.