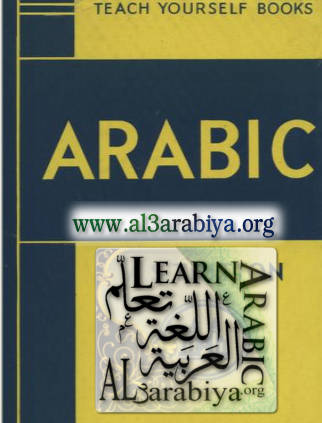 rabic is a Semitic language and so different from those usually studied in Europe ; this is perhaps the main
difficulty, there are none of the familiar landmarks. The verbs ‘.have ‘ and ‘ be ‘ do not exist ; when ‘ be ‘ is indispensable, ‘ become ‘ is used as a substitute and it does not take the same case after it as it does before it. The verb has no tenses, only two forms indicating completed and incomplete action. Normally the ‘ finished ‘ form is used
to describe past events but it is also used to express wishes and prayers where the action is only ideally finished. To
make up for this poverty the verb is developed in other ways, thus ‘ be good ‘do well ‘ approve ‘ are all expressed by modifications of the same verb.

Most words are derived from roots which consist of three consonants called radicals ; it is obvious that these roots are not words. The addition of vowels, prefixes, suffixes to the root makes words. In this way some seventy word patterns are made, each with its own meaning. In English ‘ man ‘ ran ‘ fat ‘ are all of the same pattern, a short
vowel between two consonants but one is a noun, one a verb, and one an adjective ; this is impossible in Arabic.
As there are so few word patterns the language sounds rather monotonous ; a poem must have the same rhyme
throughout and it is common to find nearly one hundred lines with a complicated rhyme like aimuhai.

An illustration will make the next point clear. KaTaBa has a vowel between the first and the second radical, yaKTuBu has not. The beginner, especially in trying to hear the language, finds it hard to believe that the syllable yak, which ends in k, has anything to do with words which begin with k.